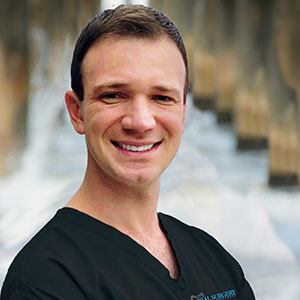 Dr. Josh Wohlgemuth was born and raised in South Florida. He went on to graduate from the George Washington University with a bachelor’s degree in business administration and chemistry. As the son of an orthodontist, he followed his father’s footsteps by pursuing his Doctor of Dental Surgery (DDS) degree from the Columbia University College of Dental Medicine in New York City. He went on to earn his Doctor of Medicine (MD) degree at the UCLA David Geffen School of Medicine. He then completed his residency in oral and maxillofacial surgery at the UCLA School of Dentistry along with a year of general surgery residency at the Ronald Reagan UCLA Medical Center.

Dr. Wohlgemuth and his wife, Sinead, have been happily married since 2019. Sinead is currently finishing her residency in pediatric dentistry at Children’s Hospital LA and the Herman Ostrow School of Dentistry of USC. In his spare time, Dr. Wohlgemuth is an avid golfer and all-around sports enthusiast. He has a love for music, whether it be playing the piano or experiencing live music of all genres. He also loves spending time with his family and friends at the beach or hiking. He cannot think of a better place than the South Bay to pursue all that he enjoys.

Dr. Wohlgemuth is affiliated with the following professional organizations: